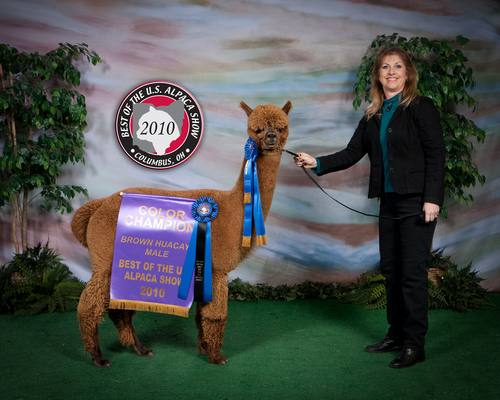 Sire: Dark Shaddow
| 31486064 | True Black |
Dark Shaddow is not being offered for outside breedings. Dark Shaddow was awarded the prestigious 2006 Reserve Herd Sire of the Year! Shaddow is what is considered truely an "IMPACT" male. He is the only true black herd sire in the US that we know of that has produced the most champion award winning offspring and is the most consistent. Fifteen awards including "Get of Sire", 3 championships, presence, crimp, density, fineness, luster, conformation, thick topknot(the densest we have ever seen) and coverage. Shaddow is as black as coal and his fleece is non-fading even at 11 years of age. He has no gray fibers at all like most true black males of his age that we have seen. Shaddow's offspring have been taking the showring by storm, having won more than 50 championships (17 alone in 2006) and several blue ribbons. Several of his offspring (all color) won yearling bred and owned in large classes which included champion white, light and fawn animals. He has produced true black offspring out of black females, bay black out of light fawn females and gray or true black offspring out of gray dams. When his offspring are born the first thing noticed is the very correct conformation and presence that is seen. Dark Shaddow is also very consistent in production of color. One of his offspring, A.L. Paca's Rose to the Occasion (10X champion gray female), a dark silver gray female seen on this page, is a very impressive girl. She sold at the 2007 AOBA Auction for a very impressive $96K, making her the highest selling gray female in the world! Rose won color championship over the only other alpaca to beat A of O Silver Celebration. (Females and males are combined at the Magical Farms/Ameripaca Futurity for championship classes). Dark Shaddow is without a doubt the best true black male in the USA. No other herdsire compares.

Ask a question
Details
Grand River has just released the information that DARK SHADDOW has been retired. We have loved this male from the 1st time we seen him and have been very happy with his offspring we have seen. Although we are saddened by this news we are happy to have bought this male. We feel certain he will carry on the excellence of the DARK SHADDOW line. His show record speaks for itself receiving several blue ribbons and 4 Championship banners!

If you are looking for a high end light brown male then look no further! Luminosity is the full package and we are very excited about this boy! Luminosity's siblings are all blue ribbon winners and all high end quality. All have won their first blue ribbon at 6-7 months of age and his full sister, Esperanza, won a championship as well at such a young age. Luminosity got his name because his fleece is so very bright it glistens not to mention it is also very dense and crimpy. His conformation is excellent and his coverage is complete from head to toe. Luminosity carries strong sought after genetics from his sire, Dark Shaddow, who is ranked the top true black herd sire in the US having won the prestigious 2006 Reserve Herd Sire of the Year award as well as having won several championships himself and producing offspring winning more than 50 championship awards. Luminosity's grandsire is the late 4Peruvian Legacy, the highest selling alpaca in history and his great grandsire is Caballero Adante. With black genetics in his pedigree Luminosity carries the ability to produce high quality offspring of dark colors. He already has several black off spring, when bred to black,on the ground. Luminosity's second cria, Isaiah, has taken the blue in his first two shows. Isaiahs first blue was a class of 8 at the Southern Select where he was the youngest in the class! His second blue came in a very competitive class of eleven entries at the Best of the US and he was the second youngest in this class! Book a breeding to Luminosity so you to can enjoy winning in the show ring.

FIRST PLACE, 2010 BEST OF THE US ALPACA SHOW

FIRST PLACE, 2010 BEST OF THE US ALPACA SHOW DARK JR. HERDSIRE COMPETITION. THIS WAS A NEW AOBA CERTIFIED SHOW THAT ALLOWED FARMS TO SHOW THEIR MALES FROM 18 MONTHS TO TWO YEARS OLD. THE DARK CLASS CONSISTED OF ALL BROWNS, BLACKS, AND GRAYS. AWARDS WERE GIVEN TO THE TOP THREE. CLASS 15

We are willing to work with you on financing your purchased alpacas. With 25% down we can be pretty creative in setting up a payment schedule that fits your needs. 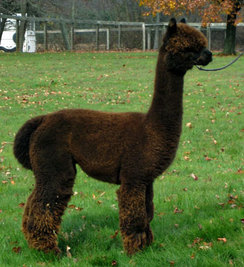 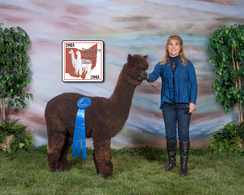 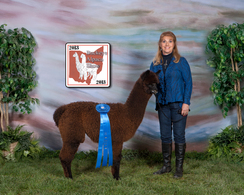 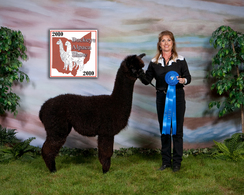